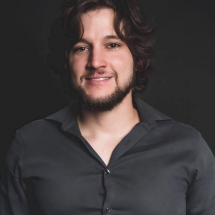 Brian George is a musician, teacher and composer based out of Orlando, Florida. Filled with curiosity, his passion for music has led to the acquisition of a wide range of musical styles including jazz, R&B, gospel, funk, blues, pop and rock.

Brian showed an interest in music at a young age and began his exploration by picking out melodies on the family piano. At the age of eleven, he picked up a guitar for the first time and became enamored with the musical possibilities. Brian spent his middle and high school years collaborating with rock, blues and hip-hop artists.

After a brief stint at Miami-Dade College, Brian transferred to Seminole State College where he studied jazz guitar with Steve Luciano. He then transferred to Rollins college where he studied a wide variety of styles under Bobby Koelble. In college he focused on refining his abilities as a performer, composer and arranger. In 2016, he graduated Summa Cum Laude with a Bachelor of Arts degree in music. Since then, he has pursued a diverse variety of gigs. He has led or performed with music groups of almost any genre, as well as, performed as a sideman for dance shows, churches, a tv show and musical theatre.

Brian began teaching his first student in 2012 and soon realized his passion for teaching. He finds joy in helping students to progress and learn more about music. No matter the student’s age, instrument or goals, Brian strives to create an environment that can ignite the spark of excitement in the student’s own musical journey.