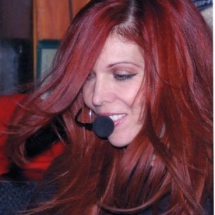 Barbara Ann Aguirre grew up in Miami and began to play piano at a very young age. She enjoyed playing songs from the radio by ear. By 2nd grade she was taking private lessons and in 4th grade she became the Church pianist at her private school.

Barbara was discovered by a fashion designer in Miami which lead to a career in modeling at age 13. While modeling in New York she started playing Guitar and landed endorsements with guitar companies. Barbara also attended HB Studio with Utta Hagen and Herbert Bergoff for musical theatre, scene study, voice and ballet. Later, Barbara,moved to Los Angeles and started writing songs and making music videos that charted on the Top40 and became the unsigned darling.

Ms. Aguirre caught the eye of Director JD Labou who asked her to be his protege and attended UCLA as a director of film and television. She taught musical theatre, voice and modeling to professional children ages 4 to 16 at Art Of The Dance in North Hollywood. She also signed with Windswept Music in Beverly Hills, toured the USA and Japan.

Barbara released singles in France, Germany and Turkey and then the full length album Ode To My Freaks in the USA and Europe.

“Music is my life” Barbara