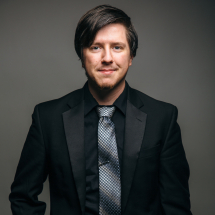 Ash Rise is a Brass Specialist and Piano Instructor serving the greater DC and Northern Virginia areas. He began his studies in middle school band class. He started lessons in high school, in his hometown of Mt. Pleasant, Michigan, with Mary Beth Orr, the 3rd horn player in the Grand Rapids Symphony. He has participated in the Honor Band of America, the Central Michigan University Honors Band, and the Michigan All State Orchestra. Ash has soloed with the Midland Community Orchestra and the Chemical City Band. He received his bachelor’s degree in horn performance at the Cleveland Institute of Music, studying under the tutelage of former principal horn of The Cleveland Orchestra, Richard King, as well as Rick Solis, Michael Sachs and Ed Zadrozney. He has also attended Interlochen Arts Camp, Aspen Music Festival and School, and participated in the 2013 International Horn Competition of America.

Rise’s pedagogical practices derive from several sources in American musical pedagogy, most prominently from Philip Farkas, for brass students, and from Nancy and Randall Faber for his piano students. Rise strives to create a fun and encouraging atmosphere in every lesson, where the student feels comfortable enough to express themselves, and works to provide the technical know-how for each instrument for the student to be able to play and perform in the most comfortable, and coherent way.

Currently, Rise is pursuing a Doctorate in Music Pedagogy and Performance at the University of Maryland, where he also received his master’s degree. He is currently studying with Greg Miller (Empire Brass) and Phil Munds (Baltimore Symphony). He is currently stage manager for the Apollo Orchestra, and a regular performer with the Landon Symphonette. He is a regular substitute player for the Lancaster Symphony, both the Chesapeake and Frederick Youth Orchestras, as well as many other theaters and orchestra’s in the region. Rise is also a band clinician for Fairfax High School, Farquhar Middle School, and others.

Rise’s primary instrument is the French Horn, and he also teaches Trumpet, Trombone, Euphonium, Tuba, and more. The instruments of the Brass family are all played in essentially the same way, by making a “buzzing” sound into a mouthpiece, and changing the length of the tube, by slide or valve changes. Brass studies present challenges at first, but get easier over time. Rise’s method derives from the Philip Farkas school of brass playing. This mid-century Chicago horn player is widely regarded for his pedagogical works including, The Art of Brass Playing: A Treatise on the Formation and Use of the Brass Player’s Embouchure (Farkas, 1962) and The Art of French Horn Playing: A Treatise on the Problems and Techniques of French Horn Playing (Farkas, 1956). For Brass students, Rise likes to focus on the aspect of “ear training” in tandem with exercises he’s developed and borrowed to “build the note”.

In addition to teaching all brass instruments (french horn, trumpet, euphonium, and more), Ash also is a piano instructor and took up this secondary instrument group while in his under-grad and graduate programs. As a foundation, piano serves as a great basis for understanding all music and harmony. Also, for younger students who are developing a passion for music and may go on to other instruments in the future, piano study offers an earlier start and development of the ear and musical coordination. Ash believes understanding and studying the piano, along with music theory, is a vital part of a comprehensive music education. For piano students, Rise likes to focus on an understanding of ear training as well as building the foundations of the current popular techniques of piano playing. Rise prefers the Faber Piano Adventures Series, as it ties all of these aspects together in an organized and succinct format.

A note from the teacher:
“Music, for me, is about craftsmanship. I grew up watching my grandpa and my dad working in a machine shop in the Midwest. It was always so fascinating to watch both of them work, whether it was welding or operating one of the several lathes, mills and presses on the floor. They had this very fundamental understanding of the machines that they worked with; not just what function they performed, but they really understood the most complex things, like what materials they were made out of, what stresses they could take, different types of oil they needed, how they could break and so on. Watching them work within this expert understanding of their craft is what I hope to emulate every time I play.”