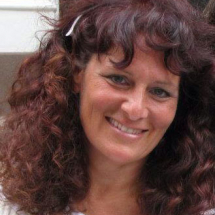 Music is joyful, and Arianna Rose brings that joy into each private lesson and classroom. Her piano and singing lessons are engaging, thought-provoking, and fun! There is a lot of laughter as well as deep learning. Kindness and maintaining a ‘safe space’ for creativity to occur are paramount. Music has been Arianna’s friend her entire life, and it’s her honor to introduce her good friend to you. Arianna loves and teaches many different styles of music including classical, standards, musical theatre, pop, jazz, boogie woogie and blues. Her students learn to compose and improvise as well as play, and experience first-hand the adage “Music is what happens in the space between the notes”.

Arianna began playing piano by going to her next-door neighbor’s house at age 12 and plunking out songs she knew on the keys. Her parents saw her interest and surprised her with a piano and lessons as an eighth-grade graduation gift. She was thrilled! Arianna continued lessons partway through college and then continued to learn and play on her own. She has been singing almost as long as she’s been talking, and began voice lessons when she was 15 years old with another neighbor down the block.

Arianna holds a Bachelor’s degree from Bucknell University in Theatre and Music, and an M.F.A. from NYU Tisch School of the Arts in Musical Theatre Writing. She is a Certified Music Improvisation Instructor through Music for People, and an award-winning songwriter. Arianna has been a teaching artist for over 16 years, teaching in-school and after school residencies and summer camps in music, theatre, and creative writing to children and adults.

Arianna sang in many choirs over the years, and has been the choir director of Peace of Heart Choir and Creative Center Choir in New York City as well as the Lexingtones of Delray Beach. She co-founded two vocal acapella groups where she sang and wrote vocal arrangements. A long-time teaching artist of music and theatre, she’s worked for the Metropolitan Opera Guild, PBS, The Calderone School of Music, Tada! Youth Theatre, Rockaway Artists Alliance, and her own company Rockaway Rose Arts Instruction. Florida teaching credits include Area Stage Company, Miami Theater Center, The Adrienne Arsht Center for the Performing Arts, Muse Center for the Arts, The Center for Creative Education, The Kravis Center for the Performing Arts, Backstage Music Network, and the Actors’ Playhouse at the Miracle Theatre.

Her musical theatre shows have been performed by Theatre Lab@FAU, the Rockaway Artists Alliance, NYU Steinhardt School of Music, Bucknell University of Theatre & Dance, Buck Hill Skytop Music Festival, CDP Productions, and the Phantom of the Opera Company in Hamburg, Germany. Arianna is currently collaborating on a musical theatre project with director West Hyler (Paramour on Broadway, Cirque De Soleil, Jersey Boys). Arianna began her career as a professional singer, actress and director before expanding into teaching and writing. Some favorite roles include Sonia in THEY’RE PLAYING OUR SONG, Lizzie in BABY, Reno in ANYTHING GOES, and Jenny in COMPANY; touring with the Peter Duchin Orchestra; and singing on the stage of Carnegie Recital Hall and Lincoln Center.

Her other interests include photography, African hand drumming, encaustic wax painting, and dollhouse rehabbing and decorating! You can see her dollhouses at her online blog if you do an internet search for “The Dollhouse Whisperer”. Arianna relocated to Miami Beach in July 2016 with her husband and our seven rescue cats, who often create interesting tone poems by walking across the piano keys! Arianna looks forward to meeting her new students and their families and sharing her love of music with you.