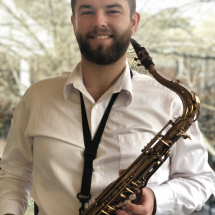 Andrew Santillo began his musical journey 16 years ago as a member of the choir in his local church and elementary school in Bridgewater, New Jersey. After moving to Alpharetta, Georgia at the age of 9, he began playing the saxophone in his school band class, which would continue for several years. After deciding to pursue music as a more serious endeavor, he began taking lessons with Matthew Crisman at the age of 18. Despite the fear that he may have waited too long to pursue his passion, several months of diligent practice led to acceptance into the highly competitive Saxophone Studio at Georgia State University. During his degree program, Andrew has had the opportunity to learn about musicianship and the saxophone from several acclaimed musicians and professors, including Dr. Jan Berry Baker and Brandyn Taylor, in a variety of classroom and ensemble settings.

A well-rounded musician, Andrew also well-versed in the likes of guitar, strings, and brass. He enjoys introducing his students to the foundations of making music, no matter the instrument. Outside of playing music, Andrew is an active performer, educator, and choreographer in the color guard community. He also earned the rank of Eagle Scout towards the end of his high school tenure. Over the past 8 years, he has been involved with numerous locally and nationally recognized programs. Andrew currently enjoys teaching musicians from a variety of backgrounds and is student-teaching part time at Lanier Middle School.