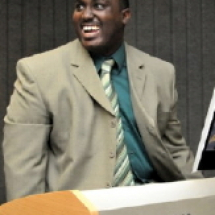 Amore Francis was born on St. Thomas, United States Virgin Islands. He began playing piano at the age of nine, studying from Mr. Tyrone Lance. Amore's enthusiastic spirit and desire to succeed allowed him to participate in piano competitions and musical festivals under the guidance of Dr. Lorna Young-Wright. Dr. Young-Wright is a graduate of Peabody Institute of Performing Arts and musical coordinator and director of the University of the Virgin Islands. Upon Amore's completion of high school, he was awarded prize pianist and musician.

Amore entered Kennesaw State University and flourished musically under the leadership of Dr. Marina Khvitia, Dr. Marina Khvitia is an alumnus of Moscow State University in Russia and she is the winner of numerous international competitions. With the opportunity to take part in overseas studies, Amore joined the Mission on Music organization in 2004, to study and observe Czech Republic, Slovakia, and Austria musical traditions and etiquette. Amore graduated with his Bachelors Degree in Piano Performance and Music Education in 2006. In addition to teaching piano he is working on his Masters Degree in Piano Performance and Theory.

Determined to further his musical career, Amore travelled with Dr. Young-Wright to Beijing, China in 2007, where he participated in the Africa Meets Asia 2nd International Symposium on African and Chinese music. In 2009, at the invitation of Dr. Lorna Young-Wright, Amore travelled to Paris, France, , where he performed at the Eglise Reformee de Pentemnot Luxembourg Recital Programme.