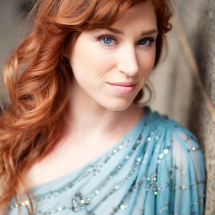 Originally from suburban Ohio, mezzo-soprano Amanda Fink began her vocal pursuits singing the likes of Aretha Franklin and Gladys Knight. As a teenager, a voice teacher introduced her to classical repertoire, and she has since enjoyed a fruitful operatic education and career.

Amanda went on to receive her Master's Degree from the Maryland Opera Studio at the University of Maryland. She has since gone on to apprenticeships and residencies with Dayton Opera, Charlottesville Opera, Pensacola Opera, and has sung roles throughout the US and Canada.

Amanda also has a background in piano, and currently studies under Dr. Stanley Cornett at Peabody Conservatory.

Amanda believes in early exposure to music of different styles, and endorses an encouraging and imaginative approach. She considers musical studies to be not only individually rewarding, but also inherently valuable to any educational model.