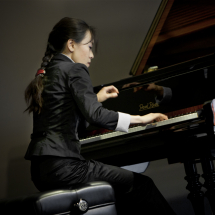 Alice Li began her formal piano studies at the age four and has nurtured and grown from her love of music. Piano played a major key role in her life as she grew up, and she has participated in numerous festivals and competitions and performed in venues such as the Hollywood Ford Amphitheater, Irvine Barclay Theater, and Segerstrom Center for the Arts in California as well as venues in Purchase, New York. She has also studied piano abroad in Vipiteno/Sterzing and Cortina d'Ampezzo, Italy.

Alice attended University of California, Irvine, where she received multiple music scholarships and a Bachelor of Music with a specialization in piano. There, she received tutelage under Nina Scolnik, who is known for her dedication to facilitating a pianist's technique so that musicality and physical actions flow effortlessly and tie together seamlessly. Alice has been invited numerous times to perform both solo works and chamber ensemble works for honors concerts, Bachelor of Music recitals, community outreach performances, and for the chancellor, faculty, and administration of the university. She has participated in masterclasses taught by the legendary Menahem Pressler as well as by Faina Lushtak, Claudio Martinez Mehner, and Dmitri Ratser.

Alice has been teaching piano and keyboard theory since she was in high school, both privately and at a music school, taking on students of all ages and levels. While her focus is on classical music, her students have played popular and jazzy pieces and songs as well as game and movie scores, maintaining a balanced repertoire that is fun, meaningful, and educational. Each student receives lessons and a curriculum tailored to his or her specific needs and learning style. Alice believes that music is a powerful and universal language that speaks to and reaches out to everyone. She hopes to help others harness their passion for music and acquire an instrumental medium of expression.