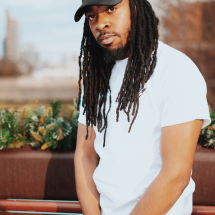 Born in Hartford, CT, Adrian Forbes grew up in a musically enriched household. From as early as he could remember he was exposed to a vast range of genres of music, and this was influential in his ability to become a versatile musician. At 10 years old, Adrian was introduced to playing drums in a big band setting. By age 15, he had decided that he would pursue a career in the music industry.

As a senior in high school, Adrian was selected to perform with the 2013 GMEA All-State Jazz band in Savannah, GA, under the direction of Erwin Stuckey. There he gained insight on the importance of reading and having stage presence in front of large audiences. His involvement in the Artists Collective Youth Jazz Orchestra under jazz saxophonist René McLean opened his eyes to the ways in which music can impact peoples' lives. Adrian's role as a piano and drum instructor emphasized the impact that he can have on youth by making music an enjoyable experience. Shortly after, Adrian was accepted into Berklee College of Music with the North American Tour Scholarship where he majored in Music Production & Engineering.

Adrian is currently living in Atlanta, GA, working as a full-time musician, musical director, engineer, and arranger for various artists such as Mayah Dyson, Chante Cann, Monica, 112, and many more.