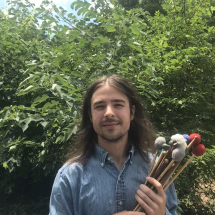 William began playing when he was 9 years old, studying classical percussion under Gary Brooks. This led to one of his first ensembles playing in church when he was only 13 and many of his formative years were here learning the inner workings of playing as one sound in a team. These foundational years shaped his mindset on how he views the power of music. It was during this time that he took instruction on playing the piano and further honed his musical talents as an instrumentalist. Will studied percussion performance at Georgia State and has performed with Odyssey Percussion Theater, Terminus Atlanta Percussion, Atlanta Falcons Drumline, Dot.s, Clothes, Atlanta improv. Orchestra, Ofir and Loathing, Corps Vets Drum & Bugle Corps and many more…

In 2011 William began teaching in high school percussion ensembles and, has since, been teaching private lessons and working with high school marching bands. William is the percussion instructor for the Lakeside High School Marching Band, ’19 & ’20. Through all of his experiences, William has become proficient on marimba, drum kit and piano, as well as versed in the instruction of reading notation, music theory, composition and technique. William currently performs and writes in a number of musical projects in and around Atlanta, in addition to being a piano, drum set and percussion instructor.