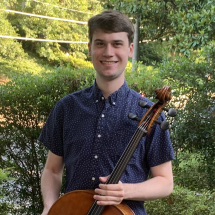 Born and raised in Atlanta, Georgia, Will Goodwin began studying cello at 10 years old. He got his start performing in his school orchestra, where he played first chair until graduation. This classically trained cellist has studied and played music from a variety of genres including contemporary, blues, and rock.

In high school, under the tutelage of Marybeth Bryant, Will played in various orchestras and chamber groups across Atlanta. He also took on his first students in high school, where he first discovered his passion for teaching. From there, Will went on to receive his B.A. in music from The University of Louisville School of Music under Professor Paul York.

Will believes studying music is extremely rewarding and engaging. He aims to combine elements of rigor with creativity to allow his students to learn important lessons about hard work and perseverance, while simultaneously expressing individuality. With each of his students, he sees an opportunity to foster personal discipline, an appreciation for the cello, and desire to grow as a musician.