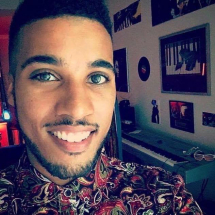 Victor Perez has been singing, playing piano, and guitar since the early 2000s. He began playing praise and worship for “Celebrate Recovery”, professionally performing, and teaching students of all ages in the early 2010s.

He also has additional experience in beginner level rhythm/percussion as well as composition both in and outside of a recording studio setting dating back to as early as 2005. Mr. Perez also has experience teaching DIY home studio setups and recording techniques for at-home/digital artists.

Victor also performs and records professionally in three different bands, primarily Light in Motion. In 2014, he independently composed, recorded, and produced the full length studio album “Silver Sunset” and in 2021 another single “Midnight” was released. Noteworthy performances include the Texas Solo Artist Awards @ Curtain Club in Dallas, TX of which he was named the winner in 2018.

Victor especially enjoys teaching newcomers to music and is very positive and patient as well. He is a strong believer of “thinking outside the box” in terms of both the composition of music and teaching in general but will always provide a structured lesson while setting individual goals for each student.