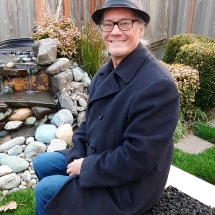 Tim was born and raised around the Arts & Music. His Grandfather is Paul Horiuchi Sr. who is the renowned mosaic artist well known for his mosaic mural at the Seattle Centers amphitheater, that was built for the Worlds fair.

Tim’s father was the first Japanese American in the Metropolitan Opera Chorus. Tim studied and experienced great vocal training with his Dad and did Vocal training throughout his musical journey in various bands singing background and lead vocals. Tim started playing Piano at the age of 7. He received a certificate by the Robert Pace Piano program at the age of 9.

Tim started playing Drum set at the age of 11, his first teacher was Louis Wilcox, and he stayed with Mr. Wilcox till the age of 14. Then started his first Band and then continued on playing in various bands around the Seattle area until the age of 21. He then enrolled into the Cornish School of Allied Arts in Seattle Washington where he was exposed to Jazz and World music. Tim played in various ensembles and studied Music appreciation, Jazz History and Rhythm and Music theory classes. He had private instructions on Drum set with Jerry Grannelli and Jon Bahlman.

Tim then started to add to his percussion vocabulary by studying Orchestral Percussion from Michael Clark of the Seattle Symphony. Tim incorporated orchestral and world percussion to drum set. Tim also has studied “The Time Frame Concept” with Steve Smith at the Seattle Drum school. Tim has had various teachers on Hand drums and Latin percussion.

In 1995, Tim built a Project recording studio and took classes on audio engineering and sound design. Tim as an engineer completed his first CD in the year 2000, “On My Way” By Blue Meadows. Tim was also featured on drum set and percussion on various tracks of the CD. In 2002, Tim executive produced his first CD titled Soulatude “The soul has an attitude” which features Tim on Drum set and Percussion.

In 2005 Tim started his own record label Urban Mosaic Records with friends and musical partners Gordon Uchima and Michael Cole. Tim also has his first release under his label, Urban Mosaic Records 2007 with Record Label Partner and artist Gordon Uchima. CD titled “The Fountain” Tim is also one of the producers of the CD and is playing Drum set and Percussion on the CD.