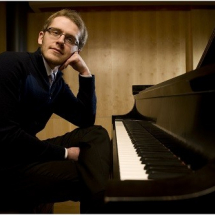 Noted for his "riveting, emotional complexity," (Washington Times) award winning American pianist, Thomas Hunter, currently lives in the D.C. Metro Area after returning from London, England where he is completing his Artist Diploma at the Royal College of Music. There, he has been named the Somers-Mountfort Scholar and is studying with Ian Jones. He has also studied with Bradford Gowen, Rita Sloan, Ann Schein, Dorian Leljak, and Larissa Dedova, and played in master classes for Emanuel Ax, Ann Schein, Edward Parmentier, and Alan Feinberg.

Thomas performs in a variety of settings including chamber music concerts and as a vocal accompanist, in addition his solo appearances. Future engagements include solo-recitals and chamber music concerts in London as well as other cities in England, at venues and series including Steinway Hall, Amaryllis Fleming Concert Hall, The Forge, and The Bath Recital Artists' Trust. This summer, Thomas will be performing solo and chamber music at the Miami Summer Music Festival in Miami, Florida, The Music Academy International in Trentino, Italy, and presenting a lecture-recital at the World Piano Conference in Novi Sad, Serbia.

Recent highlights include a performance at the Uncommon Height Gala in Washington D.C., an event co-chaired by Michele Obama. Activity from this past year has included appearances at international piano competitions, solo and collaborative recitals in Maryland, as well as performances at Steinway Hall in New York, American University in Washington D.C., The University of Maryland, Frostburg University, and at the Embassy of the Kingdom of Bahrain. In 2012, Thomas won second place in the Rising Star Emerging Artist Competition, held in Columbia, Maryland, USA. In the summer of 2013, he won first prize in the Sevag and Nairi Balian Concerto Competition in Siena, Italy, which led to performances of Ravel's Concerto en sol in Italy with Maestro, Michael Rossi. Thomas has been the frequent recipient of scholarships, and fellowships such as the Charles F. Bruny Fellowship at the Garth Newel Music Center, twice over the Helen Mack Memorial Scholarship at the Aspen Music Festival and School, and a full graduate assistantship at the University of Maryland.

In addition to his growing reputation for interpreting the classics, Thomas is equally at home with new works for the piano, and has performed premieres of in multiple US states and abroad. Furthering this, he founded the Washington, D.C. based, The Radical Sound, in 2013 with composers, Evan Meier and Geoff Sheil, a contemporary chamber music concert series and ensemble in which he is also principal keyboardist.