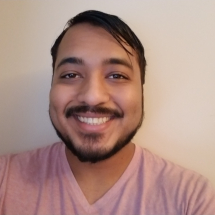 For the majority of his life, music has been an integral part of Tauseef Anam's life. While he did spend time learning piano and clarinet at an early age, it was not until the age of 12 when he finally got a hold of a drum set and made drumming a passion of his. With his first love being rock and roll, Tauseef has spent time playing with bands starting when he was 13 years old. Throughout his first two years of college, he was most notably a member of the Atlanta post-punk band "Carnivores" as well as the drummer for Chris Unck & The Black Roses.

During his time at Emory University, he was an integral part of 8 different ensembles on campus which include the Jazz Big Band/Combo, Wind Ensemble, Percussion Ensemble, and Orchestra. His time at Emory University helped him discover his deep love for jazz music thanks to his time spent with Emory Jazz Studies director, Gary Motley. After spending countless hours on his craft, Tauseef Anam became a respected jazz drummer in the Atlanta scene post-graduation. He would proceed to spend time as the house drummer for the Tuesday night Jazz Jam session held at Churchill Grounds led by Danny Harper as well as the house drummer for Apache's Bohemian Circus event for an extended period of time. His ability to play a variety of styles and genres made him sought after by many musicians in the area. Tauseef brings a wealth of experience to the table from over 15 years of experience playing in a variety of locations. He aims to bring his students the fundamental knowledge needed to have them begin their own musical journey and to stimulate an appreciation for drumming and music.

Tauseef Anam is now working as a Drum/Percussion instructor, a musician for a variety of artists and bands, (Baby Rose, New Tree, Cody Matlock, Grut, Atlanta Funk Society) a producer/songwriter and an audio engineer after graduating from SAE Institute of Technology with a degree in Audio Technology and Music Production.