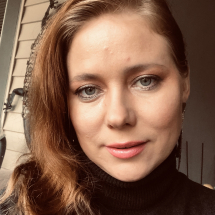 Svetlana Y Kaya has been around music ever since she was child. When she was a small girl, she took dancing classes and sang in a small groups in front of an audience . At that time, she realized that she wanted to study music and be part of music world. Svetlana has been attending music schools from the time that she was 10 years old.

In Music School, Svetlana took classes of piano, solfeggio and a choir singing. She was a great student. She learned everything very fast and got a chance to perform her skills after one year of practicing by playing piano in a local competition.

After five years of music school Svetlana decided to pursue a music career and become a music teacher. She went to Teacher's university in Russia. She studied vast of subjects including playing piano, accordion, solfeggio, vocal, music composing, conducting and etc. It was a great time for her to invest to learn playing music and became a great music teacher for everyone. She learned how to appreciate and listen music. Music had become major part of her life.

When Svetlana moved to USA, she worked in several children centers with all ages. She taught her students how to love music and sing vast of children songs. Svetlana had worked at Learning center in Lynnwood for 2 years and applied her music education to teach children. She sometimes brought music keyboard to the classrooms and taught notes to children and showed to them how to play music. Also, Svetlana had worked at Bright Horizon in Kirkland for 2 years and had been a lead teacher there. She planned lessons for the week where she taught music and different songs.

Svetlana has had many students who she taught piano and solfeggio at their home. She enjoys to teach children and adults to learn playing the piano. Svetlana adores her students trying to grow their potential and wants them to succeed in playing a piano. She wishes her students to understand, listen and appreciate music.

Today, Svetlana enjoys teaching a piano to students of all ages. Svetlana is fluent in both English and Russian. She is passing her experience and education to her students who becomes part of her life!