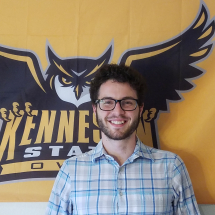 Simon Needle is a multimedia composer, sound designer, music theorist, and instrumentalist from Atlanta, GA. Since his enrollment at Kennesaw State University in 2014, he has taken it upon himself to build a diverse repertoire of talents for use in the musical world. Entering college as one of the first Music Theory BA students at KSU, he auditioned into jazz guitar program at the Kennesaw State University School of Music. He studied under Trey Wright, a nationally recognized jazz musician based in Atlanta. During this time he also sought out the tutelage of classical guitarist Mary Akerman, rounding out his skillset on the instrument. At KSU he arranged and composed various works for ensembles he participated in; this sparked his interest in composition.
During his time at KSU he studied with Steve Dancz, a National Endowment for the Arts composer with credits for PBS, National Geographic, and the Super Bowl pregame broadcast. Entering the world of digital composition, he scored his first video-game, "The Wrath of Pele" and wrote music for the web series "The BAs" scoring numerous other indie games, in addition to writing for film projects for his peers and professors.
In his Sophomore year, he wrote and published "Mood and Mode: the Impressionistic Commonalities of John Coltrane and Claude Debussy" for the Kennesaw Journal of Undergraduate Research and attended the South Central Society for Music Theory's Graduate Student workshop, as one of two undergraduate students attending the conference. By his Junior year he had presented research he co-authored with his professors internationally in Graz, Austria ("Perceiving the Mosaic in the the Mashups of DJ Earworm"). In 2018 he graduated from KSU Summa Cum Laude with degrees in Music Theory (BA) and Jazz Studies (BM).
Needle is a National Academy of Recording Arts and Sciences student member and holds a certificate from the Joel A. Katz Music and Entertainment Business Program. Now working in Atlanta, Needle continues to write and arrange contemporary, jazz and orchestral music for performances in and around the city, in addition to continuing research in the field of musicology and producing music for all media. He stays busy as guitarist for his two bands Wisteria and City Playgrounds, performs music for musicals at Act Three Productions, Marietta Theater Company and more and lends a musical hand on bass or trumpet with many other local bands.