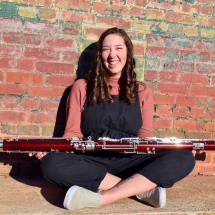 Sidney Maurice is an Atlanta native and attended school in Marietta where she began her bassoon studies at the age of 11. Throughout her years in public school, she participated in the All- State Band, Honors District Orchestra, and District Band. She attended Georgia’s Governor’s Honors Program in 2017 and received the John Philip Sousa Award upon graduating from high school.

Sidney is currently studying at the University of North Texas pursuing a degree in Music Education. She is a bassoon student of Kathleen Reynolds and has attended master classes with Eric Varner, Amy Pollard, and Barrick Stees. Sidney also actively takes oboe lessons with Dr. Johnathan Thompson. During her time at UNT she has performed with the Wind Ensemble, Concert Band, and Chamber Music studies and has worked with Brett Penshorn, Dr. Nicholas Williams, Dennis Fisher, and Daniel Cook.