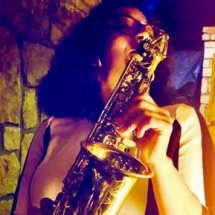 As a trained saxophonist and vocalist Shayla Logan’s career in music navigates through an array of experiences.

Shayla was born under a lineage of musicians as she recalls, stories of her grandfather playing alongside the great moguls of jazz such as Louis Armstrong, Count Basie and Nat King Cole. Shayla’s largest influence growing up was her mother and father both vocalists and musicians.

While in her early saxophone studies Shayla placed honors in All State music competitions. Shayla also sang in church and school choirs while participating in musicals and theater shows. She was later awarded performance scholarships to attend her local Community College and Xavier University of New Orleans, Louisiana.

Shayla’s college studies include music history, theory, composition, orchestration and performance. With minor studies in education Shayla has been mentoring/teaching young and upcoming musicians throughout her career.

As a professional performing artist Shayla has performed throughout the United states with and for a number of noteworthy artists/friends. Shayla not only manages her own bands but also has worked as a freelance saxophonist/vocalist, held musicians residency on Bourbon Street of New Orleans, and been a featured soloist in community symphonic orchestras.

Shayla’s captivating stage presence pierces through the souls of her audiences with every passionate performance. Shayla has a rich and sonorous tone that resonates through her melodic phrasing style. Shayla continues her career in pursuit of sharing her triumphant journey through this space and time, while documenting her truth through music.