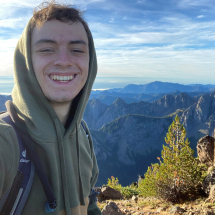 Sean Curran has been extremely passionate about music from the moment he understood it! At 7 years old, his hands met a piano and at age 11, he picked up bass guitar and it quickly became something he was very excited about. Since then, he has also learned to play guitar, ukulele, drums, trombone, baritone, upright bass, and sing as well.

Things fell into place for Sean as soon as he got to Washington and joined the school’s jazz band and orchestra. By age 14, he was playing bass and guitar for at least 2 hours a day and soon starting a band at age 13 and learning cover songs to perform. It was in this band that Sean actually began his teaching journey! He was put to the task of teaching multiple guitarists and 6 different drummers to play an array of songs and covers, increasing in both category and difficulty over time. In the 5 years that his band “Counterproductive” has been around, Sean has gained experience in teaching, playing every instrument in the band at some point, as well as marketing, promotion, event organization, music production and arranging.

Upon entering high school, he continued playing with his school’s orchestra as assistant principal of the bass section. With a growing fascination for teaching, he enrolled as a teacher’s assistant for his orchestra director. This made him by extension a copy machine expert and cello repair technician. But most importantly, he got to teach incoming freshman how to play upright bass, and he loved it! He continued to play in the orchestra and joined the school’s winter percussion ensemble, a rigorous extension of show band that sometimes practiced almost 40 hours on school weeks. The ensemble traveled to Dayton, Ohio for the WGI world championships, earning 5th place in A class, and seeing world class ensembles perform motivated Sean to write, record and produce his first solo EP, “Etiquette.”

Sean then went to Edmonds College and received a certificate in music and audio production. He now uses the knowledge and experience he gained to pour his love for music into music production, writing music, playing with his band, and of course, teaching. Sean’s passion for teaching stems from his personal journey with music. It affected him very deeply all throughout life – whether that was listening, or dancing, playing or even watching someone else perform. It provided a sort of comfort and release that was unlike anything else. Teaching people how to interact with music is important to him because it can be vital to someone’s life journey. To be able to share this joy with students is truly a gift to him.

Sean believes that learning about music is one of the single most important things you can do as a child. Playing an instrument creates neural pathways in the brain and quite literally make a person smarter. It is a way to channel creativity, acting as a medium to express life experiences and struggles rather than bottle them up. Music can be a constant in someone’s otherwise crazy life. Therefore, Sean truly believes in putting everything he has into teaching your students. This process involves finding what they love to do rather than putting an instrument in their hands and telling them to go. He strives to incorporate an element of creativity with each student- whether that is through improvisation, writing their own songs, or changing parts to already written music. Sean is more than a guitar teacher or vocal teacher- he is a guide on your student’s musical journey, wherever it may take them.

Aside from music, he enjoys hiking and recently backpacked the Tubal Cain trail and summited Mount Buckhorn in the Olympic National Forest. He frequently attends local shows and helps to promote DIY shows in the greater Seattle area. His entrepreneurial concept “Passionfruit” is an art collective that gives musicians and artists a platform to share their music, and their audiences a platform to be a part of the magic by forming a community.