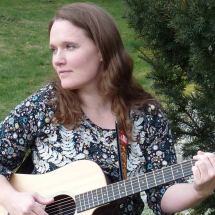 Sandi Fernandez is a singer/songwriter and multi-instrumentalist who is often seen performing solo or with her band, The Beacon Hill-Billies, around Seattle. She writes catchy toe tapping melodies that she delivers with her powerful and soulful voice while accompanying herself on guitar and piano.

Sandi started her musical journey in elementary school on piano establishing an important musical foundation she would build upon. But since she grew up in a household of flutists, she started playing flute as her primary instrument as soon as her arms were long enough to handle the instrument! Sandi was privileged to study under her sister who is an accomplished flutist with a degree in flute performance as well as the Utah State University flute faculty. Under their guidance she advanced quickly while studying flute in middle and high school winning solo and ensemble competitions and always sitting first chair in band!

In college, as a recipient of a Music Department scholarship at Utah State University, Sandi continued privately studying the flute and participated in the USU symphonic and marching bands. She also focused on her rigorous studies in Cell Biology as she earned her BS and MS in Cell Biology.

During these years Sandi kept up her piano skills by playing hymns at church and she also began delving into a new instrument, the guitar! While taking private lessons to learn guitar techniques she was able to quickly incorporated her musical knowledge from her other instruments and fell in love with singing songs with her guitar.

After years of working in the field of science, Sandi started a family and stepped away from the science lab. It was during this break from the laboratory that she rediscovered her deep connection with music. Diving head first into songwriting and performance she saw rapid success and recognition for her music. She has played local festivals such as NW Folklife Festival, Seattle Acoustic Festival, and Olympia Acoustic Festival. She continues to realize success in her original project as she has had her songs played on local radio stations as well as playing live at iconic venues around Seattle. Part of her success is because Sandi is more than a musician, she is an entertainer who draws in audiences with stories and humor to accompany her lyrical ballads. Her audiences are quick to recognize her passion for performing and come back again and again to join in on the fun.

Now Sandi is focusing all her professional energy on music by teaching private lessons and staying active in the local NW music scene. She enjoys teaching both youth and adult students and she especially loves encouraging the inner songwriters and performers inside all her students! She is the mother of three children whom she occasionally organizes into a family band. But she also often just snuggles up with her kids and a book in their free time. She is involved in volunteering at her neighborhood elementary school and remodeling the family's 1910 house in Beacon Hill with her husband.