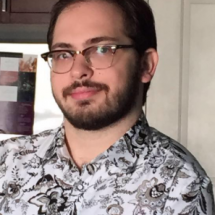 Sandon Chevlin has a Master of Music degree in Music Composition from Florida Atlantic University, and a Bachelor of Arts in Music with a minor in creative writing from Rollins College. In 2018, Sandon participated in the Vienna Summer Music Festival’s Musicology Colloquium.

Sandon studied composition under Dr. Kevin Wilt (FAU) and Dr. Daniel Crozier (Rollins College). In 2014, Sandon’s symphony “Phantasmagoria”, was a finalist in ASCAP’s Morton Gould Young Composer’s Competition. He was also the recipient of Rollins College’s Ralph Lyman Baldwin Award for music composition. Sandon’s music has been presented in master classes with John Harbison and Bruce Broughton at the 2014 and 2015 Central Florida Composer Symposia in recitals and twice in concert with the Rollins Wind Ensemble. Over a dozen of Sandon’s works have seen performance, and several have been performed multiple times.

Throughout his graduate and undergraduate studies, Sandon studied and performed on all clarinets, all saxophones, flute, and bassoon. His woodwind teachers include Ciprian Stancioi, Moe Goldstein, Christine Barron, Patrick Graham, Tom Dietz, Dr. Dannel Espinoza, Katie Mess, and Rich Ervin. At Florida Atlantic University, he was the saxophonist for the Orchestra and played contrabass clarinet for the Wind Ensemble. At Rollins, Sandon participated in the orchestra’s wind and jazz ensemble, all of which showed off his talent in the complete variety of his instruments. He has also been the bass clarinetist for Phi Mu Alpha’s Sinfonia Winds for the past two national conventions (2015 & 2018). An accomplished harmonica player for 15 years, Sandon received a rare standing ovation in his debut at the Florida Harmonica Championships in October 2018. Before moving to Central Florida, Sandon was the resident jazz musician for Che Restaurant in Delray Beach, where he performed jazz on Friday nights. He has a recording credit, playing alto and baritone saxophone on the Corey Jones Recordings.