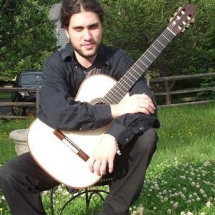 Rob Plier began his musical journey by beginning guitar at age 13 and performed in punk rock, heavy metal, and progressive rock bands in the Washington D.C. metropolitan area. He continued by delving into deeper areas of musical studies that included different instruments in the guitar family and piano. Rob holds a Bachelor of Music with a concentration in classical guitar from Radford University. In college, Rob studied classical guitar, jazz, pedagogy, and piano. Rob teaches a variety of styles including: classical, rock, folk, pop and jazz. He has experience teaching students of all ages and levels of playing and always encourages his students to pursue excellence while also making his lessons fun. Rob has successfully prepared students for recitals and college auditions, but also caters to students who are interested in playing for personal fulfillment or as a hobby.

Rob also serves as a young beginner specialist for guitar and piano instruction with Lessons In Your Home. With age groups 4 through 10, he creatively utilizes lesson methodology centered around interactive lessons that give young beginners the foundations of establishing fluent rhythm, note reading, and progressive technique development that advances the success of study throughout life. His philosophy is based on making music a part of a student's language and coordination from a young age while emphasizing the fun behind musical expression.

Though most of Rob's lessons are centered in instrumental studies, he also is versed in songwriting, composition, and improvisation. He teaches through music theory and song forms to give students a structured way to organize their creative musical ideas. Also, he has a background in jazz guitar to teach chord theory, as well as improvisation over jazz standards, rock songs, and other styles. Improvisation is one of the important teaching tools Rob uses to make a connection between the student and instrument through expression.

In addition to teaching, Rob is an active performer. He is currently performing original fingerstyle folk music throughout Northern Virginia and Washington D.C. In the summer of 2016, he was featured in Lessons In Your Home's Classical Guitar Teacher Recital and performed a combination of classical guitar pieces and his own works. Every year he hosts NatureFest in Reston - an outdoor concert featuring local musicians.