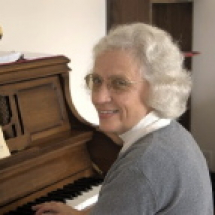 Rebecca Dhungana was born in May 1948 in New York City. Her family soon moved to the Midwest where she grew up in various small towns, living mostly in North and South Dakota. Rebecca started piano lessons at the age of 5 and soon discovered that making music was one of her favorite activities. By age 9, she began to play occasionally at her church. Also at this time she began to play French Horn in the school band.

After living for several years in Nepal and Australia, she returned to the U.S. and lived in Michigan until moving to Cobb County in 1981. She began giving private piano and organ lessons in 1985.

Rebecca is a member of the Cobb County Music Teacher's Association. She has many years of experience as a church musician. She has experience teaching students of all ages and ability levels. She feels that anyone can learn to make music and everyone should have the opportunity to try their hand at music-making.