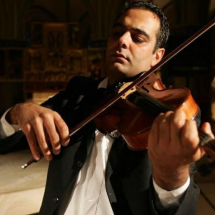 Rabee Azar, a violinist and violist, graduated with high honors in music from the Damascus Conservatory of music in 2005. He is trained in both Western classical and traditional Eastern music as well as in contemporary Oriental pop music. He was a member of the National Syrian Orchestra, the National Syrian Orchestra of Arabic music, the Mediterranean Orchestra, the Arab-Euro Orchestra, the National Lebanese Orchestra, and the National Jordanian Orchestra. In addition to performing, Azar has lectured at Al Baath University and Sulhi al Wadi Institute of Music in Syria. He also composed commercial music for many TV series. He has participated in many international concert tours in the United States, Germany, Spain, Italy, Turkey, Morocco, Tunisia, Jordan, Lebanon, the United Arab Emirates, Bahrain, and Qatar.