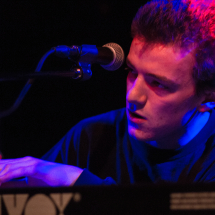 Peter Campanelli is driven by music; the pursuit of human expression though sound by means of listening, playing, writing, and recording. Pete started learning piano in 1st grade and later picked up guitar, bass, drums, and vocals. Originally from St. Paul, MN, they graduated high school from St. Paul Conservatory for Performing Artists with an emphasis on jazz studies and electric bass. In their youth in the Twin Cities, Pete was a prolific collaborator in the arts scene. Pete played bass in many different bands and recordings at the McNally Smith College of Music (did not attend but frequented). At this time, Pete also jumped into the world of self-recording.

Immediately after high school, Pete wrote and recorded their first long-form pieces of music (multi-song suite). Pete wrote most of the album, “Tangerine Screams” by The Everett Interpretation. At this time, they also released a solo debut on Subaquatic Records entitled, “Are you ever even there?” On their home recordings, Pete often plays all the instruments. After high school and these recording projects, Peter moved to Boston to attend Berklee College of Music.

At Berklee College of Music, Pete studied electric bass and a Bachelor’s of Music Production and Engineering. In the Boston arts community, they flourished as an important backing member in various neo-soul/RnB outfits, jazz trios and quartets, and any recording project that a peer needed help on. They gained a lot experience as a gigging musician during this time. Simultaneously, Pete recorded their sophomore record. It was a more ambitious musical suite; a 52-minute song cycle entitled “Horseback record,” released on Subaquatic Records. Although Pete did not acquire a degree from Berklee, the experience gained and knowledge imparted from their time at college is invaluable to their identity as a composer and musician.

Since then, Pete moved to the PNW and finished two solo records released in 2020 by Youth Riot Records. For the past two years, they have been honing their skills as a pianist, bassist, and guitarists in preparation for the pursuit of teaching. Although new to the profession, Pete has spent a long time ruminating on the best way to pass the knowledge gained from their experiences on to a young, eager mind. They believe music lessons should be fun and something to look forward to in addition to being educational and purposeful. Music teachers have been an invaluable part of their life and the idea of teaching someone about something so near and dear to them is exhilarating. In the end, Pete believes the joy of music can be transcendental and hopes to share their excitement about the art with others.