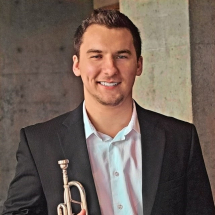 Pavel Spichak is a teaching and performing trumpet player who aims to have fun and engaging music lessons with his students. He strives for his pupils to be the best version of themselves through methodical, individualized approaches that plays to their innate musical strengths, while also building performance skills and a life-long enthusiasm for the arts. Mr. Spichak also has experience in music technology, composition, and improvisation in all grade levels.

Pavel has performed for over thousands of audiences in his 16-year career. He was lead trumpet and section leader for the 3rd Marine Aircraft Wing Band, who played across the United States at national parades, state fairs, community concerts, and for the President of the United States. He performed in the 2015 Monterey Jazz Festival, and recorded a jazz album that same year entitled "Show Me!" as part of Central Washington University's premier jazz ensemble. He played in multiple Beatles and Led Zeppelin tribute concerts whilst section leader in the Synergia Northwest Orchestra. He has played for multiple Broadway shows and headliners in over sixteen countries with Royal Caribbean Cruise Lines, and in the Leavenworth Musical Theater. He was also a former trumpet player for the Vancouver-based band The Paperboys. He currently resides in Bellevue, and performs with the Mexican band "Banda Vagos".

Mr. Spichak is a graduate of Central Washington University, holding a Bachelor's degree in Wind Performance. He is also a graduate of the Naval School of Music at Joint Expeditionary Base Little Creek-Fort Story, holding a Certified Marine Corps Musician certificate, as well as certificates for outstanding musical achievement and a Meritorious Mast as recognition for being in the top three percent of his graduating class.