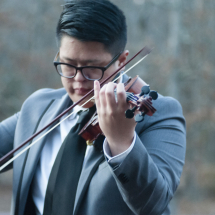 Having grown up in a diplomatic family with musical gifts, Paul has developed a love for music ever since he was 8 years old. As he grew up engaging multiple cultures in a diplomatic family, he also had the unique opportunity to study musical instruments from their native country. At age 8, Paul started his first instrumental lessons in violin, piano, and clarinet in Bulgaria - the home of the world renown National Academy of Music (Sofia). In Belgium, Paul continued the violin as well as starting to learn how to play the drum set and the alto saxophone. In his native country, he has also learned how to play a rare Korean traditional instrument called "daegeum" - a large bamboo flute.

Paul has recently received his degree in 2017 with a Bachelor of Science, studying Music and Worship: Pastoral Leadership. He has studied under the instruction of Dr. Luca Trombetta and has performed a variety of genres including baroque, classical, romantic, and film scores. Paul has been involved with the Liberty University Symphony Orchestra, Round Jericho (a jazz ensemble), as well as other instrumental ensembles. In addition, Paul also has experience in studio sessions as he collaborated with film score and cinematic arts students in producing violin soundtracks for their projects. Throughout his time, he has also been involved with choirs and has additionally taken group voice classes, under the instructions of Dr. Wade Greenawalt, Dr. Stephen Muller, and Mrs. Patricia Campbell. Paul continues to strive for his education as he attends Reformed Theological Seminary in McLean, VA as he takes the next step to becoming an ordained pastor. In the process, he hopes to share his love for music by teaching, performing, and most importantly, build strong mentoring relationships with students.