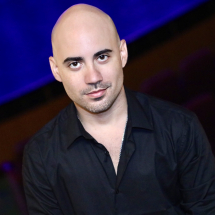 Pablo Aragona is a drummer, multi-instrumentalist, and composer from Winter Park, Florida. He was born in Buenos Aires, Argentina and at the age of nine he started playing piano, guitar, and drums. After receiving his degree as a professional musician in 2008, Pablo went to New York City to continue his studies at the Drummers Collective, after which he participated in the Jazz Plaza Festival in Havana, Cuba, where he found a lot of inspiration in Caribbean rhythms and a new music perspective.

He has been performing, touring and recording for more than twenty years with many renowned artists from Argentina and Latin America. He has played for several musicals, including Les Miserables, Jesus Christ Superstar, and Rufianes. In 2014 Pablo created El Resongon, a nine-piece band dedicated to playing and recording his own compositions. Eventually he reduced the formation to a quintet in search of a new sound and recorded an album called BACO under the music supervision of Daniel Piazzolla. Pablo started working as a drummer in the orchestra onboard Royal Caribbean International cruise ships in 2018 and in 2020 he moved to the United States.

Pablo currently works as a full-time musician, music producer and teacher. He recently wrote music for “Old Cuban”, “Don’t Eat the Bunny,” & “Moments” short films produced by Emilio Roman. He also has his own pop project called “Aragona” where he writes, produces and records all the music. He lives in Winter Park, Florida, with his wife Hayley and dog Niblet.

“I enjoy teaching and connecting with my students, it’s necessary to create a nice and friendly environment for the lesson, have fun and learn. I believe that with time, patience and perseverance the results appear. Life is way better with music around!”