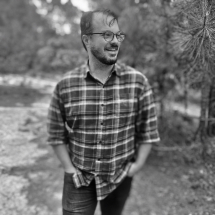 Education: Bachelor of Music in Composition | University of the Arts

Originally from New Jersey, Nathan Terry got his start on the drums at the early age of 3. Throughout his childhood and teenage years, Nathan performed with a variety of Jazz and Concert ensembles, most notably the Mid Atlantic Grammy Band. He continued to study music in college and earned a Bachelor of Music in Music Composition from the University of the Arts in 2006. There, he played drums with the Big Band, and a wide variety of small jazz combos, funk groups, and progressive music ensembles. Upon graduation, Nathan moved to NYC where he further developed his musical language, playing on legendary New York stages like The Bitter End, Mercury Lounge, Rockwood Music Hall, and The Apollo with groups like Goodbye Picasso, Hayes Peebles, io & Titan, and Casual Male. He has performed alongside notable artists like Leslie Odom Jr., Nicolette Robinson, Senfuab Stoney, and Michael Luwoye among others. Now based in Atlanta, Nathan continues to play drums with Goodbye Picasso, and works as a composer for film, tv and radio. Most recently, his original music was featured in the award-winning film “As of Yet”, a featured selection at the 2021 Tribeca Film Festival.

Nathan first started teaching in his local music shop at the age of 16 and he has maintained a roster of students throughout his creative endeavors. His teaching method enables students to build confidence through a solid foundation in fundamentals, technique, and music theory, while allowing ample room for creativity, expression, exploration and individuality. Ultimately, Nathan believes that music is a ton of fun and he aims to impart that same attitude in each of his students every week.

Bachelor of Music in Composition | University of the Arts