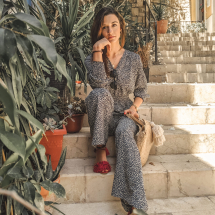 Miriam Rico Mu?oz was born and raised into a family with a passion for music. She was personally introduced into the musical world at the age of 6. Although she began her studies in piano, very quickly, at the age of 7; she transitioned her musical studies from piano to violin. By the time Miriam was 8 she was accepted into the Professional Conservatory of Music "Jose Tomas" in Alicante, Spain where she studied for over 10 years. In addition to studying in the conservatory, at the age of 10, Miriam played as a Soloist with the quintet "Quinteto Diapason".
She then gained access, at the age of 13, into the Philharmonic Orchestra at the University of Alicante, making her the youngest musician accepted into the orchestra to date. During this time she was able to accompany recognized musicians such as Erzhan Kulibaev, Ester Stankowki, and Maciej Strzeleck from the prestigious Reina Sofia School of Music. During her career she was able to participate in the 2014 Music Fest in Perugia, Italy as well as various other orchestras.