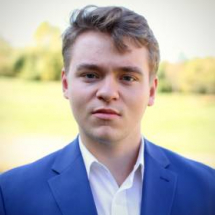 Michael Butler is an operatic tenor, piano accompanist, and teacher in the Washington D.C. area. He strongly believes that music has the power to better the life of anyone. He thinks of the lesson process as a creative team effort consisting of three parts: the student's conscious practice, the parent's caring attentiveness, and the teacher's (his) encouraging guidance. This process can allow a student to learn this beautiful artistic discipline that will last a lifetime!

After dedicating more than 10 years of his life to intensive study in competitive Classical Piano, he turned to pursue opera as a career. Though voice became his primary instrument in pursuing collegiate studies, Michael continued to play, teach, and accompany with piano and expanded into different genres, including pop and musical theater.

Michael's growth as a Classical Vocalist has continued over the years and broadened in his Opera studies at the University of Maryland. He is part of the Des Moines Metro Opera Apprentice Artist Program and continues to perform and participate in competitions. His most recent achievements include First Place in the 2020 International Classical Singer Magazine Online Competition and First Place in the 2020 FMMC Sue Götz Ross Memorial Voice Competition.

Michael greatly enjoys teaching voice and piano students of all ages and levels. His favorite part of teaching is seeing a student overcome a demanding musical passage, and the joy they find in learning their own strengths. He is a proud member of Lessons In Your Home D.C.'s staff, as he truly believes that the most promising learning environment for a student is the place they are most comfortable and "at home."