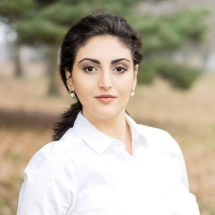 Marina Kasparova was brought up in Ukraine, where she started studying piano and choral singing in her early childhood.

At age 17, inspired by the recordings of the great Maria Callas, Miss Kasparova decided to pursue a career as an opera singer. She entered the Glière Institute of Music in Kiev to study vocal performance and piano. During her time there she distinguished herself as a promising young singer in several important vocal competitions, most importantly the all-Ukrainian national "Spiritual Sources" competition in Kiev, in which she won second prize and the Ukrainian national "Teren Uskiva" competition in Lviv. Graduating with honors from Glière, she received a special award for making significant contributions to the creative development of the Institute.

Upon graduation from Glière, she launched her own artistic project called "Free Space", which provided music lessons and performance opportunities for music students in Kiev. Her organization presented concerts of classical, jazz and pop music. Many former participants in her "Free Space" project are now successfully pursuing professional careers all over the world.

While administering "Free Space", Miss Kasparova was also pursuing her own performance ambitions by participating in masterclasses and auditions and earning distinction as a promising young artist in numerous important vocal competitions. In 2012 she met her mentor, legendary opera singer and voice teacher Maria Stefyuk. Madame Stefyuk soon recommended her pupil and protégée for admission to Kiev's Tchaikovsky National Music Academy of Ukraine. Once in the Academy, she rapidly became the prize pupil of the late baritone Roman Mayboroda, who was regarded as Ukraine's foremost voice teacher.

During her time in Kiev, the young soprano was much in demand as a soloist. She had sung often in musical events at Glière Institute, including in two productions of Mozart's Nozze di Figaro - in one as the Countess and in another as Cherubino. She repeated the role of the Countess in a production by the Opera Studio of the Tchaikovsky Academy.

She also performed in the Great Hall and the Recital Hall of the Academy as featured soloist in opera concerts of the music of Italian verismo and belcanto composers. And at the Glière Institute she sang concerts of arias by both Italian belcanto and French composers.

At Kiev's prestigious Malyenka Opera, she offered a solo recital of belcanto arias; the English Embassy in Kiev heard her in a solo recital of art songs; she sang a concert of Ukrainian music at the famous House of Scientists in Kiev; and in the city's beautiful St. Volodymyr's Cathedral, she gave a concert of Russian music.

Perhaps the highlight of her singing career in Ukraine was the opportunity to perform with her teacher, Roman Mayboroda, in a concert of the music of his father, the celebrated Ukrainian composer Georgy Mayboroda.

In 2017 Miss Kasparova graduated from the Tchaikovsky Academy as class valedictorian, receiving a Master of Music degree in vocal performance. Immediately after graduation she immigrated to the United States. She has since performed in concerts throughout the country in some of its most famous venues, including Carnegie Hall in a concert of operatic selections entitled "Love, Passion and Betrayal", at Lincoln Center in "A Musical Potpourri for 2018" and The National Opera Center in New York in a concert entitled "An Evening of Enchantment". She is also on the Young Artist roster of the New York Lyric Opera Theater.

Currently a resident of Orlando, Miss Kasparova has over 10 years of teaching experience in voice, piano, and theory. Her students take prizes at international competitions in Europe and the USA.