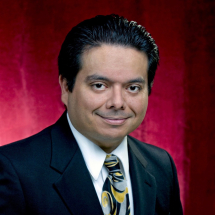 Mario Perez, musician, has been singing since he was 4 years old. He began playing guitar and saxaphone in 6th grade at Farias Elementary School in Laredo, Texas. It was there where his music teacher, Ms. Diana Ortiz first inspired him to sing and perform for an audience. Mario continued performing the saxaphone, guitar and singing through the band programs and local Folkloric groups. In his junior year in high school, he was accepted to a professional band, Mariachi Popular where he played guitar and vihuela, and furthermore, improved his vocal talent.

At the advice and guidance of his mentor, Band Director Antonio Valenciano, he attends the prestigious College of Music at the University of North Texas in Denton TX. There he graduated with a Bachelor of Arts in Music and studied voice with the late Maestra Laurel Miller. In 1994 Mr. Perez interrupted his graduate studies when he is awarded the Rotary International Ambassadorial Scholarship to study in Madrid Spain. There he studied with Maestra Belen Ordicia Martinez at the Royal Conservatory of Music of Madrid specializing in Spanish vocal literature where he received a one-year Graduate Studies Artist Certificate.

As a private music teacher and a certified elementary school teacher, Mr. Perez has taught voice and guitar students since 1990, both privately, and in the middle school and high school choir programs throughout the DFW area. He believes people of all ages can improve their singing and have fun while doing it. Nothing gives Mr. Perez more satisfaction and joy than to see his student having fun while singing and/or playing the guitar. He frequently performs as a singer/guitarist in private parties and events. You may have seen him in his most recent T.V. commercial, "Carne Asada" for Taco Bueno which is still in Youtube.

Besides performing throughout the United States, Spain, and Mexico, Mr. Perez has been singing with the Dallas Opera for over 20 years as a 1st tenor in the Dallas Opera Chorus where he occasionally sings minor roles. Mario is excited to be back with them this season to sing in Madam Butterfly, The Barber of Seville, and Dallas Opera's first production of Bizet's The Pearl Fishers. In addition to performing on the big stage, in church, and private events, Mr. Perez regularly performs in assisted living homes, and in memory care units where he feels he gets more back from them than he gives. " I learn from them more than they could ever learn from me" says Mario. He believes a good teacher listens to his students as he's teaching. Thus, both teacher and student are learning together, the student is learning the subject, and the teacher is learning how to teach that student better.