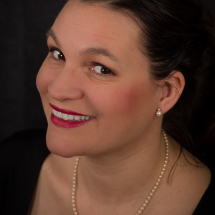 Marie Birve, has already made a notable impression across Europe: The Stage describes her as "a vibrant soprano whose performances are dominated by warmth and expressiveness".
Marie is from Malmö, Sweden but has lived here in Seattle since 2004 and she studied with Jane Eaglen.

Marie's performances on the concert platform have attracted much interest. Her US concert debut was with the Tacoma Symphony Orchestra performing Grieg's Våren; Sibelius Folk Songs and Mahler's Symphony No 4 in October 2005 followed byDvorak's Stabat Mater with the NW Symphony Orchestra and Chorale in March 2006.
She performed Marzelline Fidelio in concert at Buckingham Palace in the presence of HRH the Prince of Wales and a gala concert at Chequers for the 1998 G8 Summit.
In 2001, Swedish composer Johannes Johansson invited her to sing his new commission Den Yttersta Dagen subsequently recorded for Swedish Radio. She has performed Britten's War Requiem with Sir Richard Hickox at St. Paul's Cathedral; Mendelssohn's Hymn of Praise with the Guildhall Chamber Orchestra in Jersey; Brahms' Ein Deutsche Requiem with Peter Cross in Chelmsford Cathedral; Poulenc's Mass and Honegger's Le Roi David in St. James' Piccadilly with Brian Wright and Mozart's Mass in C Minor with Torbjörn Gustavsson in Kristianstad, Sweden.

More recent performances includes soloist for the Magnolia Chorale, Seattle singing The Song of Angel by John Taverner and at the Nordic Heritage Museum in Seattle singing Grieg, Nielsen and Sibelius Songs as part of the Novus Project in Concert: The Nordic Romantics

Marie is the leader of the Swea Seattle Choir who recently performed at the Grand Opening of the Nordic Museum in Ballard in the presence of Crown Princess Mary of Denmark.

Marie is a teacher in Swedish for the 6 and 7 year old students at the Swedish School in Seattle and there she also teaches music to students from the age of 3 to 12.
Marie loves to teach piano for beginners and adds into the lesson a pinch of music theory , some improvisations lots of laughter and encouragement.

Marie has enjoyed teaching voice since she graduated from the Opera School at Guildhall School of Music and Drama in London 1998.
Marie is comfortable with all levels of singing students both kids and adults.