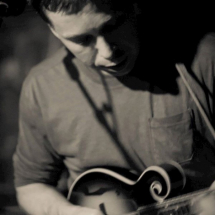 Seattle music teacher Luke Yanz grew up on Chicago's south side, and began learning music at a young age. He took piano lessons for several years before getting his first guitar at age 12 (the result of a deal he struck with his parents). His first band, Cosmic Fool, began playing live while still in grammar school. The band continued throughout high school, graduating from block parties and friend's backyards to established venues and local festivals such as the Taste of Chicago. Often the band would be booked at establishments in which they weren't legally allowed to be in before or after the set, with all of its members still under 21.

Craving a deeper understanding of theory Luke began immersing himself in music, taking piano, bass, drum, mandolin and banjo lessons, all while continuing to study the guitar. He began expanding upon his musical vocabulary by delving into the worlds of jazz, classical, bluegrass, newgrass and roots music. Luke went on to attend Northern Arizona University in Flagstaff, studying classical guitar and music composition.

Luke currently plays in several successful bands in the Seattle area, including mandolin for bluegrass band Woodland, and guitar/keyboards for indie-rock band Secretary. He has played at established venues and festivals locally and nationwide including Columbia City Theater, Central Saloon, The Vic Theater, Byrdfest and The Rock 'n Roll Marathon, sharing the stage with such notable and diverse acts as Chuck Barry, Rusted Root, Sir Mix-a-Lot, Merl Saunders, and members of Spacehog and Death Cab for Cutie. Since 2005 Luke has also taught at several specialized therapeutic schools for kids with special needs, both in Chicago and Seattle. His love for music is only surpassed by the joy he gets from teaching kids and adults alike.