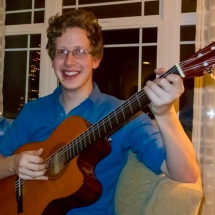 Lucas Tayne is an American singer-songwriter from Seattle, Washington. He spent his formative years playing guitar and drums in local indie rock and punk bands The Lighter Side of Epic and The Red Trousers before expanding his influences to bluegrass, americana, and jazz. Tayne has lived and gigged in Portland, OR and Boston, MA as well as spending a year in Shanghai performing with the hip hop-funk fusion group The Immigrants.

Upon returning home in 2016 Tayne quickly established himself as a staple of the Seattle music scene and recorded his debut album, A Point A Round, with producer and pianist Tim Kennedy. Praised by Divide and Conquer Music for its "expressive, thoughtful lyrics, unique arrangements and interesting phrasing" the album showcases Tayne's instinct as a composer and lyricist. Influenced by classic jazz and rock recordings the album was recorded in less than 5 hours with no over overdubs and captures the intimate feel that the songwriter brings to his live performances. While playing frequently around the North West, Tayne is working on his sophomore album due out in late 2018. In addition to his solo efforts he also collaborates regularly with singer-songwriter Sarah O'Dea.

Lucas first discovered his passion for teaching while working on his B.A. in Psychology at Boston College. A research internship sent him to the Boston Children's Museum where he presented children with short learning tasks. This experience led to a job in Shanghai preparing Chinese students with the necessary skills to attend American universities. While much of this work involved teaching math and sciences a large portion was also devoted to English. Upon returning to the U.S. Lucas turned his knack for teaching to one of his greatest passions: Music. Lucas approaches music with central belief that he is teaching a language. Like any language the use of music will differ between every individual. Some people might want to master giving a meticulous presentation while others may be more interested in learning to hang out and jam. Lucas teaches every student to pursue the goals they are most passionate about. With his knowledge of theory and technique and experience over a broad range of genres Lucas is comfortable teaching students of all skills, ages, and ambitions.