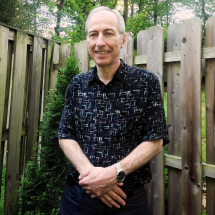 Larry Orf has been inspired by music since childhood. Artists such as the Beatles, Jimi Hendrix, and Eric Clapton were some of his first influences. Originally playing guitar by ear, Larry began playing in bands in his early teens and continued in his twenties. Along with rock, Larry developed an interest in jazz music as well.

Larry began teaching guitar and bass in 1985 and resumed playing in bands as well. As someone who has played a variety of styles of music Larry is prepared to help his students to play the style in which they are interested. Not all students are the same and it is important to fit the interests and learning style of the individual.

In addition to guitar instruction, Larry also began teaching piano in 1985, as he established a strong basis in piano study at Berklee College of Music. He has been an active piano teacher with Lessons In Your Home for the last 4 years, and like guitar instruction, he excels at identifying the interests and motivating factors that make piano study a success.