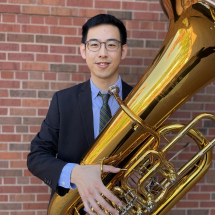 Kevin was born and raised in Taiwan, a beautiful island country in East Asia. Prior to moving to Seattle, Kevin earned a master degree in tuba performance at DePaul University School of Music in Chicago in 2018. He has also just completed his Doctor of Musical Arts in Tuba Performance, secondary study in Wind Conducting, from the University of Cincinnati College-Conservatory of Music (CCM) with a full scholarship.

In his five years of studying in the United States, Kevin has won positions in the Civic Orchestra of Chicago as an associate member, and in the New World Symphony as a seasonal substitute member. Additionally, Kevin also has performed with different ensembles, such as the Chicago Composer Orchestra, Taiwan National Symphony Orchestra, Wheaton Municipal Band, 5th Wave Collective Music Ensemble, and more.

In the fall of 2021, Kevin will work with Santa Rosa Junior College as their Low Brass Adjunct Instructor. Besides teaching brass instruments and leading ensembles, Kevin has received more than a decade of professional piano training and has been a piano teacher for more than 7 years.

As a music teacher, Kevin believes he is not only teaching music but also helping students develop the ability to think independently. His teaching philosophy is to train the students as their own teachers. Kevin also understands that not all students have a life goal to be a world-class musician, but upon completion of their course of study, he expects that the students possess the following personality traits: being creative, communicative, confident to stand in front of people, always enjoying the beauty of music and embracing for new knowledge.