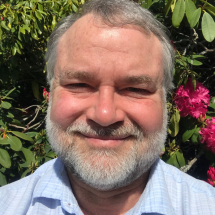 Ken began his musical endeavors as a child by taking private piano lessons and has continued playing piano since. After going to Klondike days as a 12-year-old, and hearing a banjo playing bluegrass music he obtained a banjo and learned from an Earl Scruggs book and record and also is initially self-taught in guitar, although he has since taken private lessons in both. While in middle and high school Ken took up trombone in Band Class and, since graduating in 1979, has played in Big Bands and small jazz ensembles as well as concert bands . From 1988 to 2001 he led his own Big Band in Toronto, The Hurricanes Dance Orchestra, until moving to Seattle where he stays active playing trombone in the Big Band scene. While in Toronto he took lessons in AfroCuban and AfroBrazilian percussion from Memo Acevedo and continues to play intermittently. Most recently Ken has picked up ukulele and singing, and has performed locally at Pike Place Market and also while working as a ride share driver (only while not moving, of course). He has recently volunteered at Seattle Music Partners, a non-profit providing music education for elementary school students in the Madrona neighborhood of Seattle. Ken enjoys singing and is a supportive member of a community choir, Joyful! Noise. He looks forward to meeting students and sharing both the delight and struggles of learning music.