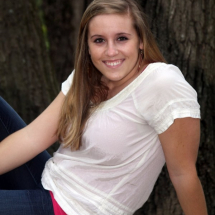 Kaylee Bramlett was born and raised in Marietta, Georgia. She began taking piano lessons since the age of six where she soon discovered her love of music. She participated in state-wide competitions and continuously placed high in her age group. On top of learning to play the piano, Kaylee was active in her school's choir and soon began to play the flute in band. With her choir and band experience, she was able to travel the world with her groups and perform for many occasions such as St.Patrick's Day in Dublin, Ireland.

West Georgia was Kaylee's original college of choice where she studied Music Education. With West Georgia's band, she had the honor of visiting Antigua in the West Indies where they premiered the first marching band in the country. She also was given the opportunity to be the flute section leader in 2007. After two years at West Georgia, she decided to transfer to Georgia State to continue her Music Ed. degree but with a more cultural and eclectic environment. At Georgia State, she was named principle flautist and had the pleasure of performing many varieties of music with high level musicians from around the world.

Currently, Kaylee enjoys teaching children of all ages on all instruments. She has a passion for young children and hopes to instill the love of music that she found very early on in her life.