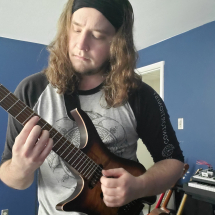 A lifelong learner, Kalen has always been most influenced by his teachers and mentors, and seeks to pass on that inspiration through his own lessons. Kalen has been an avid guitar player since 2008, beginning with a passion for Rock, but branching out into Metal, Jazz, Fusion, Folk, Funk, and beyond through high school and college. He received his Bachelor’s of Music in Jazz and American Improvised Music from Metropolitan State University of Denver in 2019 under the tutelage of Dave Devine, Ron Miles, Shane Endsley, Don Byron, and Dawn Clement. Recently, he has been working with Mike Abbott in preparation to attend the Lamont School of Music at University of Denver to complete their Graduate program.

Kalen has a wide repertoire of musical styles and performance experience. He has performed at a variety of jazz clubs around Denver and also has performed in musical theater, having played guitar in the pit orchestra for MSU Denver’s productions of “Sweet Charity” and “Edges”. He also frequents the Mercury Cafe for their Friday night Jazz Jam Sessions. A wide variety of styles have been part of his studies, covering all manner of American and Improvisational music ranging from old-timey Folk and Blues, to the Funk and R&B of the James Brown era, to modern Fusion.

Teaching guitar lessons is one of the most important aspects of music for Kalen. His teachers and professors throughout his education have been his most formative musical forces. His teaching journey began in high school, being the teaching assistant for the school’s guitar class, providing supplemental instruction to the students and additional insight into the instrument. Throughout college, he mentored classmates in music theory, finding a special interest in the academic side of music and helping his peers to hone their skills in the subject. Outside of college, he has worked with middle and high school students, giving group and individual lessons at Byers Secondary school to the students of Madilyn Slocomb. Passing on those lessons and passions is truly what matters most to him. An amazing teacher can mean the difference between abandoning music and making it a lifelong pursuit.

Outside of guitar, Kalen also experiments with music technology and recording, having interests in software such as Pro Tools and Ableton Live to wade into the realm of electronic music as well, and to blend his guitar playing into those to create uniquely personal music. He also owns 4 cats, loves cooking, and consuming various types of media in the fantasy and sci-fi genres.

Helping students by guiding them through their own inherent strengths and interests creates the best environment for students to bloom into the best musician they can be.