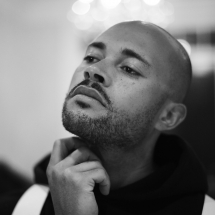 Born Joshua Crosby in Windsor On, Canada,  grew up playing drums and making music in church and on his father synthesizers. He continued drumming and making beats until he eventually moved to Nashville, TN, where he was immediately hired as a Touring drummer for Capitol recording artist Britt Nicole. After touring for a short time playing with multiple artists and recieving multiple endorsements, Joshua was introduced to the studio life and began interning for world renown mix engineer “F. Reid Shippen”, while working under Grammy Nominated and platinum producer Robert Marvin.

Since then Joshua has gone on to have a successful music production and engineering career across almost every genre of music, working with established recording artists and writers such as Mat Kearney, Britt Nicole, Selena Gomez, Trinidad James, Cher, Michael Bolton, American Idol Adam Lambert, and Owl City just to name a few.

Joshua Crosby created My Kid Brother Music LLC in 2011. Having success in Country Music, Gospel and Christian Music, Hip Hop, Soul, and Rock, Crosby has proven that he is as versatile in the studio and as a producer as he is touring a drummer.