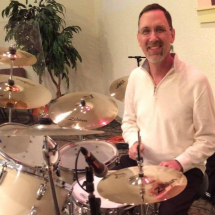 John Odom started playing the drums at the age of 10 and has been playing the drums and percussion for over 35 years. He played snare drum and bass drum in the symphonic band throughout his junior high and high school years. He also played in the Drum and Bugle Corps in the Air Force where they marched in parades and won many awards for excellence. He has played in three Christian bands and one rock band. Currently he plays the drums in a Christian rock band here in Orlando. He is also the worship drummer for his church and began teaching in September of 2009.

John's education includes completing the Drum Set Fundamentals course with Berklee College of Music in 2012 taught by Professor Yoron Israel. He completed the Introduction to Music Theory course at Valencia Community College in 2014. He has attended several drum clinics by many top drummers and teachers including Steve Gadd, Tommy Igoe, Pat Petrillo, Chris Coleman, and others. He has learned much about how to improve and be creative as a drummer from these clinics.

John is affiliated with several teaching organizations. He is a member of the Professional Drum Teachers Guild, the Sabian Education Network, and the D'Addario Education Collective. He is also a Drumeo and Drumsense certified instructor.