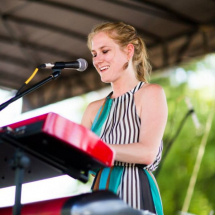 Jessica Holloway, from Waycross, GA began her journey in music at a young age. Being a raised a minister's daughter, she found herself on stage at a small town church by the time she was seven years old. This is also when she began taking piano lessons. By the time she was in her teens, she was leading the youth church band and participating in ministries such as over seas and home missions trips. She was also involved with teaching and mentoring young children in the church her father pastored.

In her early adulthood Jessica moved to St. Simons Island, GA where she played in music projects with several seasoned musicians. She surrounded herself with professionals which allowed her to glean from and grow in her field. It lead her to share the stage with artists such as John Popper, Ivan Neville, and Randall Bramblett. She was a co-founder for the band Soul Gravy which produced an album and played many festivals and concerts throughout the south.

In 2012, she began working with the College of Coastal Georgia's summer program which was to encourage children ages 7-12 involved in music. This was a two hour class teaching a room of twenty children basic music theory and music appreciation. Jessica moved to Denver, CO in the fall of 2014 beginning a new chapter in her music career. Immediately finding like minded musicians she co founded the band Jubilingo for whom she plays the piano, organ, clavinet, and sings. Her band has opened for acts such as Marcus King, Jeff Austin, Jerry Joseph and the Jackmormons, and Juno what?. She is very involved with the music community here in Denver.