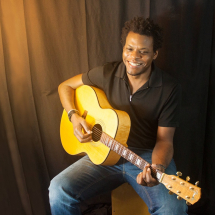 The grandson of a first generation rock n’ roll guitarist and vocalist and son of a prominent gospel singer; Jermaine Rand was a true musical devotee spending most of his youth performing in every available outlet of his Raleigh, NC, hometown.

After receiving his Bachelor of Arts Degree from the University of North Carolina at Charlotte, Rand relocated to Atlanta, GA. He made the rounds as a session musician and sideman, recording and performing throughout the U.S. with an eclectic mix of artists including Fergie (Interscope), The Black Eyed Peas (Interscope), Dionne Farris (Columbia Records), Van Hunt (Capitol Records), Public Enemy (Def Jam), Joi (Universal Recording Group), India Arie (Motown), Victor Wooten, Mother’s Finest and Cee-Lo Green (Arista/Gnarles Barkley) before branching out on his own.

Rand is a devout supporter of music education. In addition to providing private music instruction to players of all ages, Jermaine has taught literally hundreds of students in public school as well as teaching audio engineering at an Atlanta Metro area technical institute. His teaching philosophy is to tailor the instruction to meet the artistic, creative and musical goals of the student. His proudest moment as an educator was his tenure directing and instructing “at risk” students in a music program for the Salvation Army Boys and Girls club, sponsored by Fender guitars and guitarist Bonnie Raitt. Rand has also performed interactive instructional performances for the Songs for Kids Foundation and the NC 4-H Camp program.

Hailed as a “creative genius” (Performer Magazine) and recently featured in Guitar Player Magazine, Jermaine Rand’s latest CD “Beyond Yesterday and Tomorrow” – on which he is the featured performer, writer and producer – is a captivating blend of Rock, Soul, Flamenco, and Afro-Cuban/Latin. Rand continues to garner critical acclaim in both local and international publications and has also received considerable airplay in markets such as Washington, DC, Florida, Georgia, Indiana, and Massachusetts.

Jermaine is currently teaching guitar, drums/percussion and voice as well performing live in support of his latest recordings. He is a long standing member of the American Society of Composers Authors and Music Publishers (ASCAP). His music and playing can be heard on MTV and movie soundtracks such as “Just Wright”, “The Honeymooners” as well as one recording receiving a Grammy Nomination for Best Urban Contemporary . Rand also composes commercial music for the Barber Martin Agency and The Park Group on behalf of Pocket Change, LLC. He has worked on commercials for Cato Clothing, Yuengling, Michele Obama’s “Let’s Move” program, nTelos Wireless, CAMC Hospital, and many more.

University of North Carolina at Charlotte