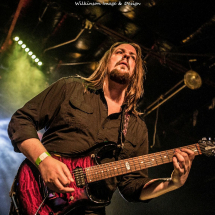 Jason Donnelly is a guitar performer and guitar teacher who's passion for the instrument started long before he started his professional music career. He started teaching guitar in the early 90s and when playing specializes in Rock, Metal and Pop..

Jason started performing in clubs and bars throughout New York city at the age of 16, headlining many famous NYC venues such as CBGB's, L'amour, The Pyramid Club, The Bank, and The Crazy Country Club. During this time Jason was fortunate enough to open for many national and international artists like Dee Snider, Twisted Sister, L.A. Guns, and Anvil before even completing High School, learning his trade by the musicians that inspired him to start playing in the first place. He signed first recording contract in 2007 and began touring internationally. He continued this trend until 2015 when he joined Ulterium Records recording artists Millennial Reign. The tour for their "Carry The Fire" album would culminate with the direct support slot opening for Stryper during their "To Hell With The Devil" 30th Anniversary tour.

Jason enjoys teaching students of all ages, levels, and abilities. "We all start at the beginning" says Jason and he strives to keep the lessons fun and engaging while simple to understand. For his advanced students he's able to call upon a wide array of advanced techniques such as sweep picking arpeggios, picking through arpeggios, high speed alternate picking, long legato lines, improvising through the modes diatonically, etc. He believes in teaching music theory and understanding what you're playing.

Jason loves to pass on his knowledge and build the next generation of great players, including giving advice for touring, recording and performing for those that want it.