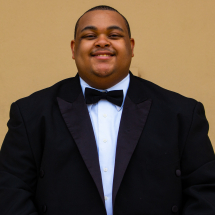 Frederick Blanchard is a musician and teacher from Palm Bay, Florida. He moved to the Orlando area where he works as a front ensemble instructor for Winter Park and Ocoee High School, as well as a substitute teacher for Orange County Public Schools where he substitutes for music directors of all programs.

Frederick is a member of the Orlando Opera Company, and the Orlando Choral Society where he sings in the professional choir Voci del Cuore and the Community Garden Choir, under the direction of Dr. Jeffery Redding and Ms. Christine Le.

Frederick has received instruction on both percussion and voice from Jeremy Katalenic, Mark Baker, Bobby Blum, and Kit Cleto. He has served as music director for the Mu Eta chapter of men’s music fraternity Phi Mu Alpha Sinfonia, and regularly leads masterclasses and clinics at his Alma Mater as well as other secondary schools and community groups in the percussive and vocal arts.

He has also conducted the Valencia Singers and Valencia Symphonic Band as a student conductor and was a music theory tutor for Valencia College. In addition to that, he is the founder, president, and artistic director for the F.O.A.N. ensemble based in Orlando, FL.