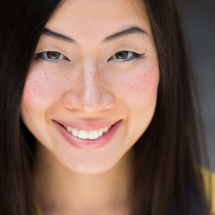 Evelyn Tsen was born and raised in Malaysia where she began performing as a pianist at the age of six. Growing up as a church musician, she was exposed to all types of music from classical to jazz, and from the traditional to contemporary genres.

During college, Ms. Tsen discovered her vocal abilities while pursuing a major in Music Therapy. There, she began her training as a singer and became fascinated with opera.

Highlights from 2015 include performing and speaking in Rialto Women's Luncheon: Women and Confidence; debuting in the chorus with Odyssey Opera; singing Sophie with Boston Opera Collaborative's Werther in which she was applauded for her "pure, flexible voice" (Boston Intelligencer). She has sung with prestigious opera programs such as the Advanced Artist Operaworks Program in Los Angeles and the International Performing Arts Institute in Germany.

In addition to performing, Ms. Tsen is passionate about teaching. She believes that music can be a means of expression for every individual. She strives to share the power of music through both her teaching and performances.