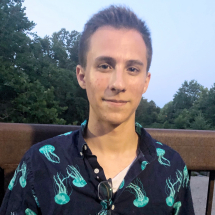 Evan Williamson is a guitar, electric bass, and piano instructor based in Silver Spring, Maryland. He believes that the more time and energy you put into something, the more you grow to love and appreciate it. This long-term process is one he hopes to instill in each of his students.

Evan's first introduction to the guitar was at the age of 9. A fan of the game "Guitar Hero III: Legends of Rock," he felt compelled to learn the instrument and quickly realized he had talent for the instrument that stretched beyond the screen version. In high school, he joined the jazz ensemble and also began writing his own music. His arrangements were performed by the ensemble during his senior year. Evan was named Montgomery County Public School's "Outstanding Jazz Soloist" in 2015 and Music USA Festival's "Outstanding Soloist" in 2016.

A recipient of several scholarships including UMD's "Music Merit Scholarship" and Leisure World Kiwanis Foundation in Silver Spring's "Beryl Mina Schoman Music Scholarship," Evan is currently entering his final year as a jazz music and performance student under Gerry Kunkel at the University of Maryland. In his time at UMD, he has written and performed a multitude of arrangements with the jazz department, including an arrangement of one of Sergei Rachmaninoff's piano etudes for the Jazz Lab Band. He currently plays and writes for the contemporary jazz combo at UMD, and regularly performs at a variety of venues ranging from vineyards to jazz festivals in the Washington Metropolitan Area, including The Fillmore, The National Building Museum, and MilkBoy ArtHouse. Though he has left "Guitar Hero" behind, he hopes to one day write music for video games.

In addition to teaching guitar, Evan also teaches electric bass and piano. His background in bass began at age 13, stemming naturally from his experience on the guitar and has been integral to his abilities as an improviser. He began learning the piano around the same age, initially recognizing it as an effective tool for writing music. He is continually exploring his secondary instruments, and constantly looking for new ones to learn.

Evan aims to foster an understanding of critical listening, to teach students to discern and articulate what they value in music, and to emphasize the utility of music theory and the joy of composing. He can teach students a variety of styles, including (but not limited to) rock, jazz, classical, blues, pop, soul, and latin music, on top of music history, theory, and composition.

Above all, Evan believes that music makes the world go 'round. A universal language, music speaks volumes often without saying a word.